A Starr is Reborn at Round Pond

I know what you are thinking. This is Foster Dog Summit. The first photo on a blog post is almost always what I consider to be the best summit shot that I took of the hike. I always aim to reach a summit, then position the dog as best he or she is capable of sitting or standing against a scenic background, and take as many photos as possible in the hopes that one of several will be "card worthy" so to speak. And since I am a strictly amateur photographer who shoots exclusively with one hand on the camera and the other hand on the leash, those "Wow, what a great photo" moments are not as plentiful as I would like.

So, this photo, like most of the ones I take, is far from perfect. It is not framed correctly - the dog's tail is a bit cut off to the left, and you can see my hiking boot in the far right corner. Sure, I could have photo-shopped out the boot and edited in a bit of the dog's tail from another photo, but this is a reality blog.

At this point in the hike, I was lamenting the fact that I had taken a time consuming wrong turn along the Round Pond Trail. Then, I did not backtrack far enough initially to figure out the wrong turn and wound up not having time to reach the summits of Mts. Klem and Mack. Since I was hiking with Starr, a dog that had lived his entire life of just over four years within the confines of a shelter in rural Mississippi, I had high hopes for his first extended outdoor adventure.

Starr, a 4-year old Labrador retriever mix, was just rescued from the shelter less than two weeks ago. He has obviously been well taken care of physically by the shelter staff, but most of the world outside of cages and concrete is wholly unfamiliar to him. That did not stop Starr from thoroughly wagging his tail and enjoying the company of his human and canine hiking companions. My friend Karen and her adopted dog Charlie joined us for the lengthy stroll around the Round Pond Trail.

Starr was so affectionate that it was difficult to photograph him. He kept trying to lick my hand, so I could not get far enough away to take his photo when we stopped along the trail.

We had selected a more secluded hike in an attempt to minimize Starr's interactions with sights and sounds that completely unknown to him. He was understandably a bit spooked by the sight of a mountain biker coming towards us on the trail.  Starr simply needs more time to acclimate to his new surroundings as he was a bit startled and wanted to retreat, but he was not at all aggressive towards the unfamiliar sights and sounds.

It was shortly after this encounter that we made our way to the shores of Round Pond and the opportunity for Starr to have his first encounter with fresh water - an element that most Labrador retrievers find instantly addicting. I was privileged to witness Starr's joy as he took his first few paddles into the pond. You can view and share them from the post below:


That priceless moment when a dog that spent his whole life living in a shelter learns how life should be. Starr's trip...
Posted by Foster Dog Summit on Sunday, June 14, 2015 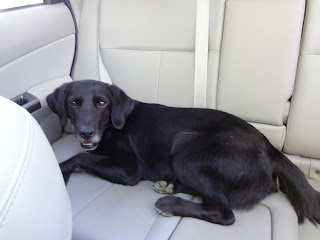 Following our 4-hour tour, Starr was ready for a nap and rested comfortably and quietly in the backseat as I drove him back to his wonderful foster family. He currently resides in a foster home with adults, a 7-year old girl and other dogs - all of whom adore "Starsky" and are helping him acclimate to life outside a shelter. If you or a friend or family member would like to inquire about Starr, please visit Almost Home Rescue of New England to learn more or visit Starr's petfinder profile.

If you cannot adopt but would like to help, please consider donating towards a wish list item to help the shelter in Mississippi where Starr's friends still reside.

See you on the trails!

Posted by Foster Dog Summit at 10:03 PM No comments:

My own canine companions who have hiked many miles with me are now ages 13 and 14. They were adopted from local animal shelters.

While my dogs still enjoy the shorter hikes, they prefer to spend their leisure time engaged in lower impact activities such as swimming and sunbathing.

I wanted to continue hiking with dogs, and I believe in the foster care model of providing temporary shelter for homeless dogs.

Now, I am hiking with dogs who are in foster homes.

Welcome to Foster Dog Summit where you can see and share their adventurous journeys to the summits of New Hampshire's highest peaks and help find them a home!